Geta Sandals: What You Need to Know

Most people know what to expect when they think of traditional Japanese attire, for example, the kimono comes to the mind almost instantaneously.

The next time you see someone wearing a kimono, take some time out to look at their feet. As is the case with most different cultures around the world, footwear also forms a big part of traditional dressing.

In Japan, this footwear, that is adorned by both men and women, is referred to as geta sandals. Designed in a manner that is quite similar to the slippers you see around the world today, your initiation into the culture cannot be complete without delving deeper into geta sandals. 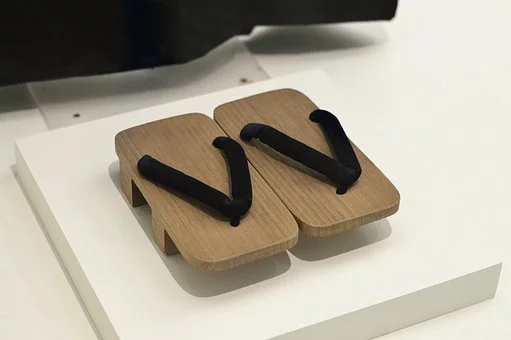 What Are Geta Sandals?

Geta sandals are a form of traditional Japanese footwear that is worn with outfits like a kimono, usually during festivals or cultural events these days.

The base of these slipper-like sandals is made with a piece of wood that is elevated because of two smaller pieces of wood under it. There is a fabric thong that goes through this base to keep your feet in place as you walk.

While it may seem like this is an uncomfortable piece of footwear to wear on a regular basis, it has been known for being quite comfortable, adding height and also proving to be an inspiration for a number of newer styles of footwear that have become increasingly popular in the recent years.

The earliest use of the Geta — then referred to as the “Ta-Geta” — can be traced back to the Yayoi period where people were getting involved in cultivating rice but facing difficulties and getting through the muddy fields.

The Ta-Geta, where Ta refers to the rice fields, were used to make the process easier. For many centuries after that, these elevated sandals served utilitarian purposes and made the life of people so much easier.

Maiko or geishas in training also wore distinctive geta referred to as okobo as a part of their traditional attire. If she became a geisha, she would also have the chance of rising to the highest rank of courtesans in ancient Japan, referred to as the oiran.

The geta worn by the oiran were called the koma-geta. They were usually higher than the rest and had a more expensive lacquered design. Just by looking at their feet, people would be able to make the distinction between a maiko, geisha or oiran.

Another popular type of geta work by young girls was referred to as the pokkuri or koppori, which had a small bell attached to the bottom.

Many people confuse the straw sandals work by the samurai and commoners in the Edo period with geta sandals but that is a mistake that can be avoided. Those are the waraji sandals in particular.

How Should Geta Sandals Fit?

There is a common misconception that you should wear your geta sandals in the same way that you wear flip flops at home. This leads to people pushing their toes right to the front of the sandal.

Instead, your feet should be kept back so that there is a small gap between your foot and the corner of the geta sandal where the fabric goes through the middle of your big toe and the finger next to it. This allows for better balance on the elevated platform.

If you are looking to purchase a pair of geta sandals, always try to make sure that it is slightly smaller than what you are used to. The back of your foot should protrude a little so that you can maintain your balance. Finally, practice walking before you hit a festival or event!

After going through the historical evolution of the geta sandals, you would understand that there is a range of reasons why Japanese people over the years have opted for the geta sandals.

First and foremost, the elevated platform can add to the functionality of this footwear, especially when people were working through dirt or mud. It was also a good way to distinguish between people holding different positions in society. In a more modern context, these sandals are used to complete the traditional look when you step out in your yukata. 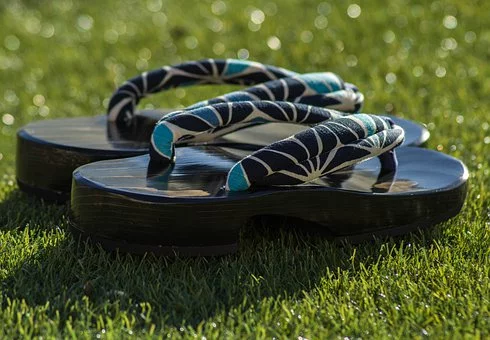 The geta sandals are traditionally worn with the yukata, a summer kimono that is usually found in a range of bright colors and patterns. The fabric used to make this kimono is usually lightweight and breathable so that it can help you stand the sun.

As the yukata is an informal dress, the geta sandals are also considered quite casual and can be found at many different stores around the country. These sandals are also more suitable for work as they are quite sturdy. In many cases, people also wear these with Western clothes as well. Finally, you may also spot sumo wrestlers sporting this style.

While geta sandals are the footwear option that most Japanese people turn to when they are wearing the yukata, more formal occasions call for a more formal pair of footwear. This is where the zori sandals come in.

Designed with a relatively narrow heel that is shaped like a wedge, these sandals have a covering of some expensive fabric — brocade, leather, vinyl or more — which gives it a more finished look. Zori sandals are usually quite expensive, which is why they are reserved for special occasions like weddings. Here, they are work with tabi or white socks. You can also get handbags to match the zori that you are wearing.

Even though you may be tempted to think that geta sandals are no longer relevant in today’s time and age, these sandals have actually served as an inspiration for some of the most popular shoes that you find yourself turning to for comfort and style. The Papillio Collection by Birkenstock, which offers platform shoes for better comfort is one such example. The tatami sandals by the same company are another great example of how geta sandals serve as the basis for many modern shoes.