Fans have been around in Japan for a very long part of its history and have an elaborate journey of evolution. Japanese fans also cannot be bracketed into a single category as there are several types of fans in Japan.

The following is a brief guide to Japanese fans and some basic facts and factoids you may like to know about this cultural artifact.

The earliest history of Japanese fans can be traced back to burial sites in the 6th century CE. These sites were full of images and paintings of fans so you know that this object has some cultural significance.

There is documentation that Japanese folding fans were gifted to the Chinese emperor in 988 by a Japanese monk.

These cultural exchanges continued over the ages and both China and Korea have their own versions of the folding fan.

Japanese fans are called by many different names, depending on the type of fan you are referring to.

The rigid, non-bendable one is called uchiwa. They can be made of a variety of materials, including palm leaves, straw, etc.

The folding fans that can be opened and closed at will are called sensu. They can also be made of different types of material, including silk, paper, sandalwood, etc.

There are also war fans and brisé fans which were used for signaling during war and for decoration, respectively. 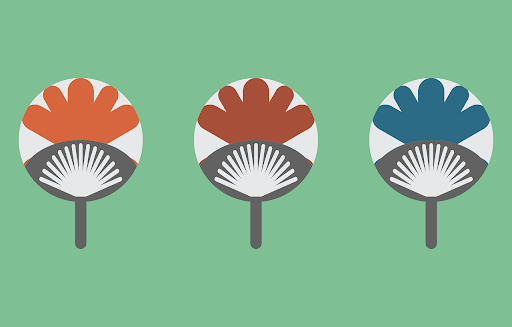 What Are Japanese Fans Used For?

While the straightforward answer would be that the Japanese fans were a way to alleviate the heat and keep one cool, it also has deep cultural significance and denotes the social status of the person using the fan.

The number of wooden strips in a typical Japanese hand fan would denote the social ranking of the owner. The more ornate fans would, of course, belong to the aristocrats and samurai class.

In fact, the war fans were an important part of a samurai’s uniform.

Today, bigger cities like Kyoto and Tokyo do not see these fans being used even to provide relief from the heat, let alone as markers of social class.

Japanese hand fans are more decorative in purpose and make for great souvenirs for tourists to take back home.

Japanese Fans and the Performing Arts

The fan is an important part of Japanese dance forms. The traditional Japanese fan dance typically has a young woman or a group of women at its center.

The movements are slow, lilting and deliberate. The fan can be both an uchiwa or a sensu and there can often be a story or a narrative that is built alongside these movements.

Another Japanese dance form that has a prop at its center is the Japanese parasol dance which has similarly slow and deliberate movements, again performed by women.

The Japanese fans are one of the biggest symbols and cultural representations of the country outside its borders.

Even if you see a Japanese fan in a museum far away from Japan or at somebody’s house as a decorative item, your social education will typically tell you that this is a Japanese item or a replica of a Japanese item.

Given the long and colorful history the hand fans have had in Japan, it is befitting that they stand in as an image for Japanese culture abroad.